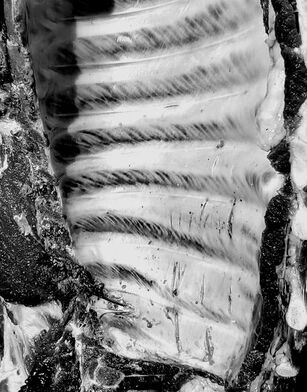 The act of cultivation is ultimately a relational activity between the cultivator and cultivated. This is true for plants, but even more so in the cultivation of animal life. No matter what lengths I may take to divorce myself from the activity, I can never fully hide the fact that the care of an animal is a two-way relationship. In its essence, the activity of husbandry itself will always change those who are involved.

Yet, growing animals for food can cause a moral disconnect because the relationship is one truncated by necessity. The ethical imperative to do what is just is muddied by timeframes, economics, and the fact that one being’s very existence is dependent on its eventual extermination by another. It is both a benign and savage condition. I care for a creature and know all the while that in a short time it will die by my own volition. Thus, mourning impregnates the very act of care from the outset. There is no clarity or easy answer and the paradox of living is laid naked at our feet.

This microcosm reflects the process of something bigger. Sustaining my life and that of my family must, in a sense, result in death and transition. Nothing is without significance. It is inescapable, but I am forced to contend with moral consideration; individual/species, self/other, system/component. But, perhaps more fundamentally, it is a question of how close am I willing to get to the consequences of my decisions? Directly creating sustenance, in all it’s raw immediacy, is also an exhaustion of the spirit. There is a price that is to be paid for our choices, but it normally is hidden by ordinary living. I see now that cost has meaning.
​
Execution day eventually comes, but when paying the price of my effort there is no escape from the conclusion of my own choices. We all meet our end either sooner or later, it’s just that now I see it differently. I had hoped for cold efficiency but the emotion in my heart is as heavy as the blood on my hands.