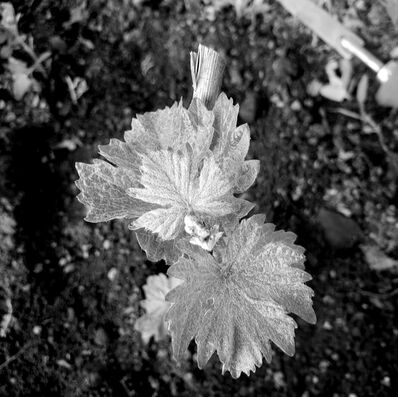 Like success, failure is also a process, but for the neophyte the uncertainty of failure is excruciating because there is no frame of reference to gauge a way forward.  Any new effort is a path that is being travelled for the first time. We can recognise that we aren’t where we are supposed to be, but that is not the same as salvaging a wayward journey. Vain searches for progress yield doubt, and that drowns what was once the momentum of a previously naïve optimism.

This spring has been cold. Too cold, for too long. Buds should have burst months ago, and even though the established vines nearby have had a slow start too, it is little consolation. In my nursery the combination of stagnant canes and weeds are the only result of my labour.

But, wallowing in self pity will not make anything grow. The season and temperatures are not mine to control. The only antidote to despair is to work. I may not be able to coax a reluctant growth on my own, but at least I can remove the weeds so they don’t choke the vines along the way.

I cut each one from the earth with a knife so as to not disturb the canes. I am careful, methodical, but over thousands of cuts it’s only a matter of time before I cut one too close. The hooked blade misses the weed and rips a cane from the ground. No greenery above, but there are roots emerging below. Struggle is what makes life interesting, and real struggle happens quietly beneath the surface. The seemingly dead and stagnant are rooting their foundations. Life is trying to find a way.
​
April turns to May, May to early June, and now, finally the first few buds push. Failure still isn’t a foregone conclusion, but with buds turning into leaves I have been given a burst of renewed hope.  So far, at least for a lucky few vines, death will be kept at bay.