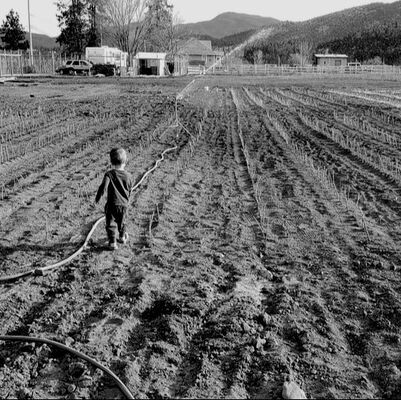 Pressure always accumulates in the unseen. It builds slowly. Fissures come first, the cracks come later, but over a long enough time frame the limit is reached before the change of state is inevitable.

Hitting a limit and being broken will always have an element of performance. It is both a public and private act. Farming is no different, the results of one’s effort are always on full display. Our competence, or lack thereof, is laid naked to the world. As winter hangs on and spring is delayed, I see bare cuttings protruding from the ground. They are spindly testaments to the variables beyond my control.

Fear, anxiety, and the overwhelming breathlessness of drowning are inescapable when the weeds overtake barren canes. Temperatures stay low and growth is denied. The warmth needed to develop roots and burst buds is absent. It is said that stressed vines produce the best fruit, but it is never mentioned that the stress needs to be appropriate to the capacity of the organism. It doesn’t do anyone justice to crush a child.

Yet, despite all this, there is solace in the fact that the earth will continue to turn, the warmth will eventually one day come. Perhaps I get lucky, but luck is aided by working with the things that are under my control. Success will be determined by the accumulation of action through time. Failure is more often the result of giving up from the pressure too soon.

The only way forward is in a willingness to double down on the controllable, and the controllable things are always the little things. Pressure crushes or pressure creates. Dirt and diamonds are ultimately the same; equal stimulus, different response.